In our family, every day is Veteran’s Day. I am lucky enough to be one of the few Americans who have truly seen how hard our military personnel work day in and day out to keep us safe. I think of it like the slogan of MTV’s the Real World: “You think you know, but you have no idea.”
Each and every one of our heroes in uniform represents the meaning of selfless bravery while remaining humble to the fullest. There are many times in the past four years, and even now as my husband is no longer serving the country, that I have become overwhelmed with pride and honor to not only know him, but to share my life with him; especially when it comes to all that he has sacrificed for our family and most importantly, our country.
This past Sunday, we had the opportunity to be a part of The New England Patriots’ and the NFL’s Salute to Service as they honor service men and women from all five military branches for the entire month of November. It’s not just about Veteran’s Day; it’s about celebrating Thanksgiving for the whole month by showing our military how thankful we are for their service.
Believe it or not, I often think they go underappreciated, but as always, they remain humble so the ordinary American may not think this is so. If every NFL game this month was like Sunday’s game as I experienced, then each person in uniform that was able to be a part of Salute to Service, received the exact thanks and appreciation he or she needed.
As one of the few who got to tag along with their service member, I also felt honored to be included. My involvement was neither necessary nor important, but it was nothing shy of amazing to witness the gratitude first hand. As one would presume, all of the military personnel present for Sunday night’s game were dressed in uniform. The sight of a large group in uniform alone, is enough to bring a smile to my face.
Thirty-seven minutes prior to kick-off, we proceeded onto the field; almost tracing the entire perimeter of the field before lining up behind the Patriot’s end zone. Watching the players from only a matter of feet away from us warm up (literally) for the game, was surprisingly not the best part of my evening. The mere one to two minute walk around the field brought tears of pride, honor and gratitude to my eyes. The stadium noise rose decibels as America’s finest were announced and entered. Every Patriots’ fan that could get to the front row, made sure they did so they could high-five or shake the hand of a service member while yelling “Thank you!” or “You rock!” and “We love you!”
They were not just Patriots’ fans, they were the fans of the United States Marine Corps, Army, Navy, Air Force and Coast Guard. The men and women in uniform were celebrities. At that moment, each and every courageous and selfless person in uniform, received the gratitude and appreciation of a lifetime. I almost wish they could experience that every day, because that is how often they deserve it.
And at the moment, on the night of the coldest Pats game in twenty years, I had never been so proud of my husband. 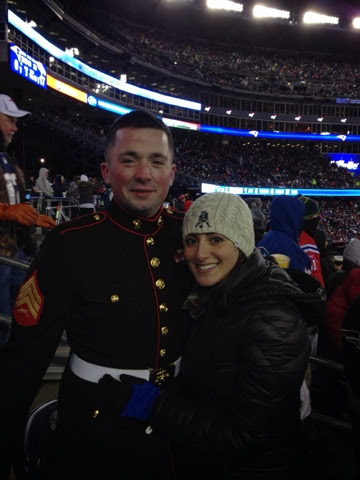 This is what a wind chill of 5 looks like…. 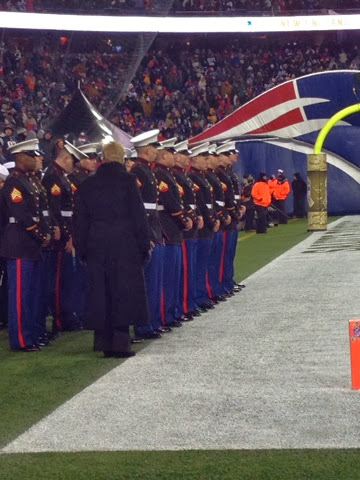 There was an error retrieving images from Instagram. An attempt will be remade in a few minutes.

I’m here for you boo!

Get In My Head…